The surgeon in my case DID cause quite a terrible injury (sub-meatal urethral stricture) during the radical prostate surgery which was conducted on 7 August 2017.

I needed an emergency urethrotomy first (on 11 September 2017). That did NOT work and the stricture came back very quickly. He wanted me to use dilation but I did not agree, given the literature does not support it.

Fortunately, my surgeon was good enough to refer me to another surgeon who specialises in urethral strictures and he managed to conduct a 1st stage penile urethroplasty and cystoscopy on 11 October 2017. That managed to fix the sub-meatal stricture and I was able to return to work more or less regularly after mid-November.

The stuff below is my research conducted starting 20 August 2017.

RESEARCH August 20 2017 PRIOR TO SOLUTION

Removal of catheter after prostate surgery was very painful in my case. I’m also having continuing severe pain inside the tip of my penis – making it almost difficult to urinate and even walk. It is now nearly two weeks after surgery.

COULD BE FROM THE CATHETER:

“burning in the urethra could be as a result of the catheter or having urinary tract infection.
the best thing is first to check the urine and make sure that there is no infection… ” [Source]

My research has suggested that catheters CAN injure. These are called IATROGENIC INJURIES (i.e. caused BY INSTRUMENTS). “Endourological procedures are the most common cause of iatrogenic ureteral injuries. When identified at injury and treated properly such injuries seldom lead to loss of renal function. [Source]”

Iatrogenic Trauma: Iatrogenic urethral injuries caused by instrumentation are by far the most common cause of urethral trauma. Urethral ischemic injuries related to cardiac bypass procedures are not infrequent and can result in long and fibrotic strictures. ” [M. Hohenfellner · R.A. Santucci (Eds.) Emergencies in Urology]

However, it also seems to be the case that catheter trauma would lead to bleeding and clotting. There is none in my case.

“In the absence of blood at the meatus or hematoma [a solid swelling of clotted blood within the tissues], a urological injury is very unlikely” [ibid]. Note that “The amount of urethral bleeding correlates poorly with the severity of injury, as a mucosal contusion or small partial tear may be accompanied by copious bleeding, while total transection of the urethra may result in little bleeding (Antoci and Schiff 1982).” [ibid]

COULD BE REFERRED PAIN FROM THE SURGERY

“I’m seven months post-op from a robotic RP. After walking or standing for a period of time–30-60 minutes is typical–I slowly develop a burning pain in the tip of my penis. … I just about always have burning during urination, too. That burning typically lingers for a few minutes after urination. ” [Source]

“I believe that’s [pain in the penis] common, but varies from person to person. My pain in the tip of my penis lasted 2 months. My doctor said to take advil and stay off my feet when possible. You’re right, sometimes the pain was excruciating. The good news is it goes away.” [Source]

“I had penile pain up to 8 mos post surgery.” [Source]

“I still have a slight sting/burn on occasion , my surgery was sept 19th 07” [one year earlier] [Source]

“I did have stinging at the tip but it slowly diminished over time.” [Source]

“It is getting better very slowly. This is week 4. It’s like watching grass grow” [Source]

“doc felt that it may be a scab or existing bruise in urethra..dont think it UTI or a strciture as the urine is clear and flow strong. doc suggested to wait and see for improvement…aggressive approach may to put a scope in the penis and see the problem and also do CT scan..but that will only irritate the urethra more..” [Source]

“Lots of guys complain of that pain. My theory is that in a lot of cases it is caused by irritation from the stitches that were used to stitch the urethra to the bladder neck. Those stitches will be attacked by his body as he heals and absorbed but that process can take months and months and in the meanwhile they can be irritating. His problem could also be some sort of entrapment of the pudendal nerve in the area of his surgery. The good news is that the pain usually goes away eventually.” [Source]

“It’s possible that ibuprofen might help. Your discomfort is caused by irritation and/or inflammation in your internal stitches and ordinary pain killers might actually help, especially those that are anti-inflammatories as well. If that doesn’t work, you might ask your doctor if he minds if you try some pyridium to see if it helps with your discomfort. It’s a urinary analgesic that is available over the counter in the US and Canada.” [Source]

One GP (doesn’t sound like one) has recommended Amoxycillin [Source]

OTHER DATA RE: IATROGENIC TRAUMA 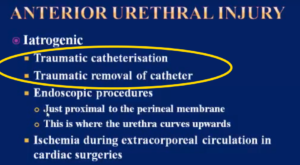 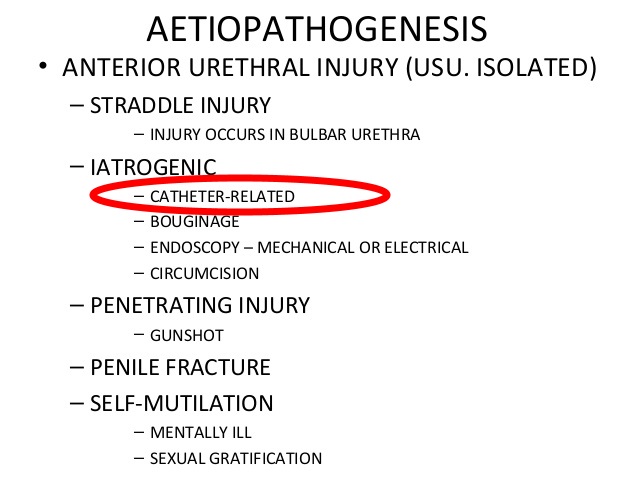 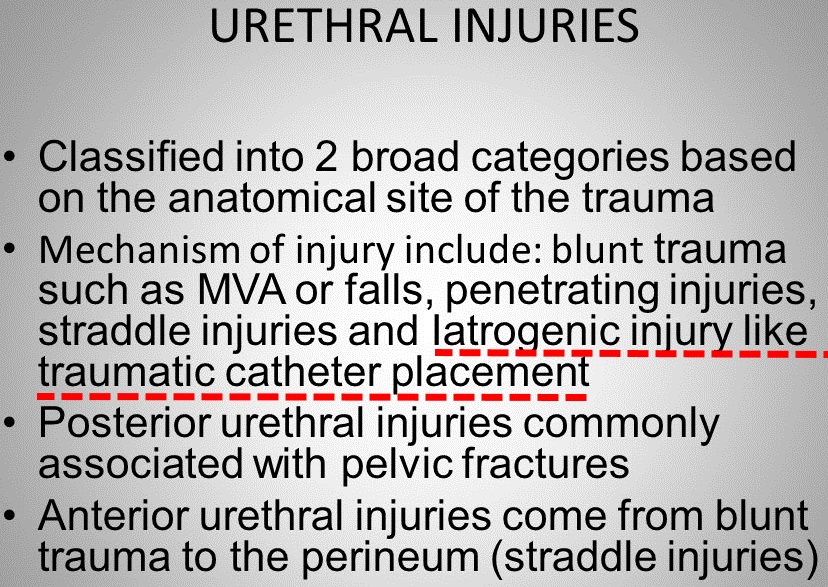 This entry was posted in Prostate cancer.