EVEN IF MY SURGEON HAD DONE A DVIU DURING RADICAL PROSTATECTOMY, THIS ISSUE WOULD HAVE REMAINED A LIFELONG ISSUE

When urethral strictures are identified at the time of catheter placement for another surgical procedure, assessment of the need for catheterization should be made. [Source: Male Urethral Stricture: American Urological Association Guideline]

Urethral strictures may be dilated in this setting [when a stricture is suspected during surgery]to allow catheter insertion, and dilation over a guidewire is recommended to prevent false passage formation or rectal injury. Alternatively, DVIU may be performed, particularly if the stricture is too dense to be adequately dilated. SP cystotomy may also be performed to provide urinary drainage at the time of surgery if these initial maneuvers are unsuccessful, or when subsequent definitive treatment for urethral stricture is planned in the near future. [Source: Male Urethral Stricture: American Urological Association Guideline]

[Sanjeev: My surgeon felt something blocking the catheter during the prep for the prostatectomy. He did not do dilation or DVIU at that stage but moved on with the prostatectomy. I understand that using a large cathether is essential for such a surgery. In my case the goal of fixing the bigger issue – cancer – led to a secondary injury that is going to remain with me lifelong. EVEN IF HE HAD CONDUCTED A DVIU AT THAT STAGE, THE SITUATION I NOW HAVE WOULD HAVE BEEN UNCHANGED. Therefore, there was NO WAY to avoid what I’ve now got.]

URETHROTOMY IS GUARANTEED TO FAIL

RECOMMENDATION: NO MORE THAN ONE URETHROTOMY

“During the last 30 years urethroplasty has improved in efficacy and safety, while urethrotomy is increasingly considered neither cost-efficient nor effective in the long term. Urethroplasty is reported to have lifetime success rates ranging from 75% to 100%. Repeat and unsuccessful urethrotomies impose costs to the patients in the form of lost wages, unnecessary health care expenditures, decreased quality of life and unnecessary anesthesia. The fact that urethrotomy has a low success rate is a strong argument for opting for the more effective urethroplasty instead of a less effective urethrotomy.” [Source]

NOTE: THIS ISSUE IS NOT STENOSIS!

It is hard to get information on this issue from the internet. First thing to note is that it is quite different to meatal stenosis, which is a narrowing of the opening (this is how it looks). “Meatal stenosis is a common complication of circumcision.” Curing stenosis is relatively easy and is done through a surgical procedure called meatotomy during which the meatus is crushed with a straight mosquito hemostat and then divided with fine-tipped scissors. (here is a video of how it is done]

WHAT A MEATAL (or fossa navicularis) STRICTURE LOOKS LIKE?

It appears this issue was very common with prostatectomies in the past (Some Common Complications After Prostatectomy, J. Cosbie Ross and L. F. Tinckler, The British Medical Journal, Vol. 2, No. 5153 (Oct. 10, 1959). The issue still occurs in around 2 per cent of the patients. 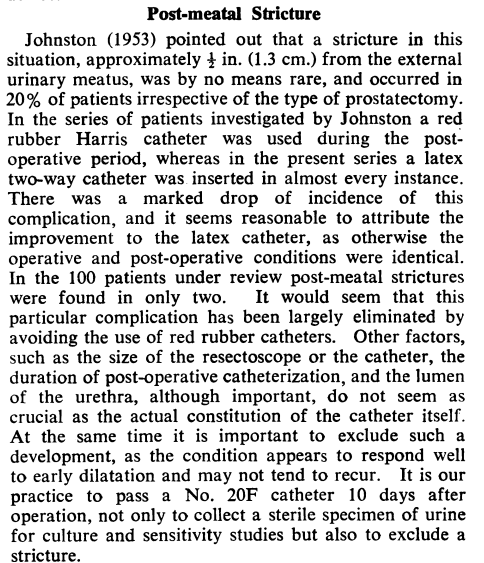 Patients who opt for repeat endoscopic treatments or intermittent self-dilation in lieu of more definitive treatment, such as ure­throplasty should be advised that success of a sub­sequent reconstructive procedure may be lower when following a plan of repeated endoscopic surgery and/ or intermittent self-dilation. Similar to other types of stricture, exact delineation of length and etiology is important for guiding treatment.

Dilation is a bad idea. In my case, when the stricture recurs, I should undergo urethroplasty (or whatever the term is called).

Pictures of Dilation of the Urethral Meatal Stricture

What are the Treatments for Meatal Stricture / Meatal Stenosis? [Sanjeev: these are quite different things]

What Are The Alternatives?

What are the risks of Meatal Dilatation?

Dilatation catheters
These are usually sterile hydrophilic coated single use catheters with NO drainage eyes. They are used for keeping the urethra patent in patients with strictures or who have had surgery to the urethra. Dilatation catheters will not drain the bladder. Shorter length meatal dilators are available for men who need only to dilate the meatus to avoid meatal stenosis, or to dilate a sub-meatal stricture. If the stricture is higher in the urethra then a full length dilatation catheter (40cm) will be needed. [Source: Trust Guideline for the Management of Teaching Clean Intermittent Self-catheterisation (CISC)]

DILATION IS NOT A GREAT IDEA

– Meatal/sub-meatal stricuture: Do a formal meatotomy instead of excess dilation

“For urethral strictures in the penile urethra to the bulbar urethra, dilation is not recommended.” [Source]

CAN DILATION WORK IN SOME CASES? – UNLIKELY

TREATMENT OPTION 2: MEATOPLASTY/ URETHROPLASTY – fixes 90 per cent of the time

URETHROPLASTY CAN FAIL IF YOUR SURGEON IS NOT EXTRAORDINARLY COMPETENT

” the success of open urethroplasty is very dependent on the surgical technique and the expertise of the surgeon. When urethral surgery is not properly performed, early recurrence of the stricture is a very common complication. … Although stricture recurrence is always a possibility, even when the surgery is performed by a qualified experienced specialist, recurrences more commonly occur when surgery is performed by urologists not exclusively specialized in male urethral and penile reconstructive surgery. When the surgery is not properly performed, failure is an expected outcome.” [Source]

Note that this is different from the ear meatoplasty! And note that is is not meatotomy, although some doctors use the terms interchangeably.

ONE-STAGE MEATOPLASTY IS POTENTIALLY AN OPTION IN MY CASE 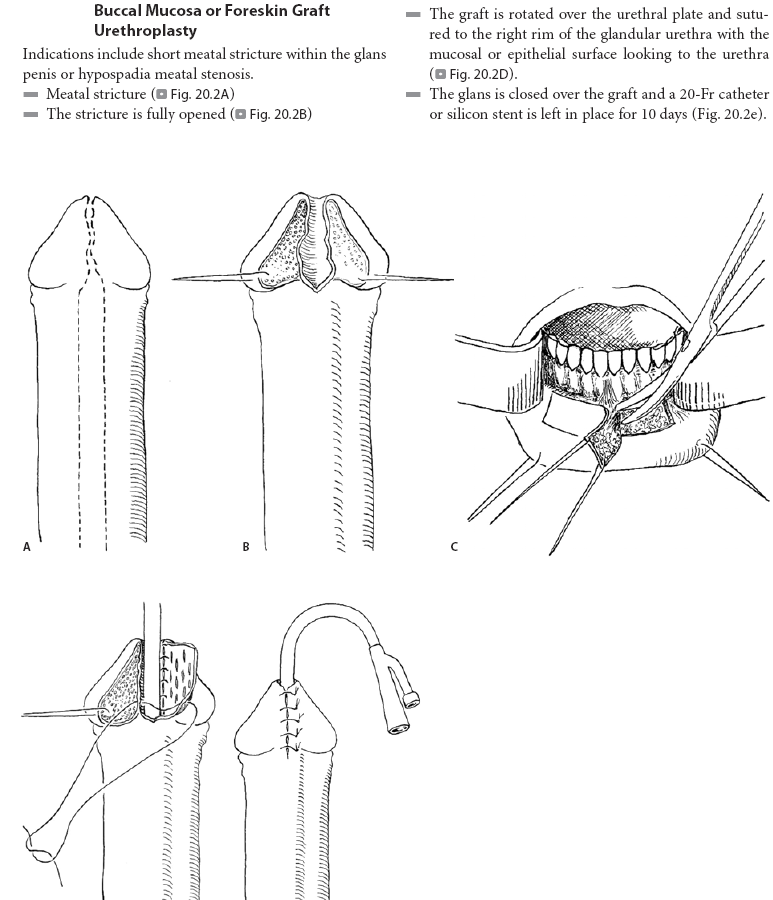 “For the most complex strictures of the anterior urethra, including the urethral meatus, a staged surgical approach is adopted, removing the stricture then placing a graft in the open space. This is allowed to heal open to the air for a period of 6-12 months, before it is “re-tubularized” into a urethra. This is usually reserved for individuals with strictures in the pendulous urethra, very scarred strictures, repeated failures, and very long strictures.” [Source]

A TEN PERCENT RECURRENCE RATE EXISTS EVEN FOR URETHROPLASTY

The surgical technique of Meatoplasty is generally suggested in patients with meatal urethral strictures. There are three basic types of Meatoplasty [Source] This is perhaps the best description.

Glanular/meatal stricture can be seen as an isolated problem or as part of more extensive urethral stricture disease. Various treatment options are available, including penile flap and buccal mucosa, for the treatment of stricture at this location

This entry was posted in Prostate cancer.